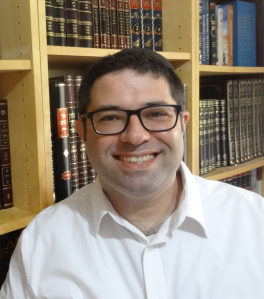 Parshat Vayishlach describes the events leading up to, and including, Yaakov’s confrontation with Esav, and it is while travelling towards Esav that we are told about Yaakov’s encounter with an angel with whom he wrestles until morning.

Yet just before describing Yaakov’s encounter with the angel, the Torah records a number of curious details concerning the circumstances of this encounter. In particular, even though Yaakov was travelling with an entourage, we are told that this encounter took place when Yaakov was לבדו – alone (see Bereishit 32:25), leading our Rabbis to suggest a number of reasons as to how and why Yaakov was not with his family at the time (see for example Rashi, quoting Chullin 91a).

But in addition to offering further details about this event, our Rabbis also use this opportunity to explain and wrestle with the concept of being לבדו in terms of how a person lives and how a person leads.

According to the Gemara (Chullin 91a), we learn from these words that a Talmid Chacham should not go out alone (יחידי) at night, suggesting that aloneness is a dangerous thing (nb. we have numerous other rabbinic sources which apply this principle to all people – see for example Avot 3:4).

Interestingly, beyond this discussion about personal safety, we also find this terms of יחידי (alone) in the context of religious leadership where we are told that a religious judge should not sit alone (יחידי) in judgement alone, ‘for there is only one Lone Judge (ie. G-d)’ (Avot 4:8).

Though discussing very different things, I believe that these sources have led some leaders to draw the conclusion that religious leaders should not only avoid being alone but also avoid taking a lone stand, and I think this is why some of our greatest poskim (halakhic decisors) were extremely reluctant to publish some of their most bold halakhic rulings until a consensus had been reached among their peers.

At the same time, we find that the Midrash (Bereishit Rabbah 77:1) positively compares Yaakov to G-d, noting that the aloneness of Yaakov is comparable to the aloneness of G-d. Though not stated in the Midrash, perhaps the positive comparison is due to the fact that Yaakov was preparing for battle since we find that our Sages emphasize G-d’s aloneness when He ‘goes out to battle’ (see Rashi on Bemidbar 12:5).

This suggests that there are occasions, especially times of crisis, when leaders must be prepared to take a lone stand and in such cases, rather than affronting the honour of G-d, they are emulating the ways of G-d. Evidence of this is found in numerous halakhic sources where we are taught that in a שעת הדחק (an extenuating circumstance, which perhaps could be described as a time of spiritual battle), we can rely on a דעת יחיד (a lone halakhic voice).

What we see from the above is that while there are risks involved in being alone, and while a person should seek to work within a consensus, there may be situations when people – and especially religious leaders – must take a stand, even if it means taking what seems to be a lone stand.

Yet what we learn from the Midrash that compares Yaakov to G-d is that when such situations occur, we are never alone because G-d is standing right by us.